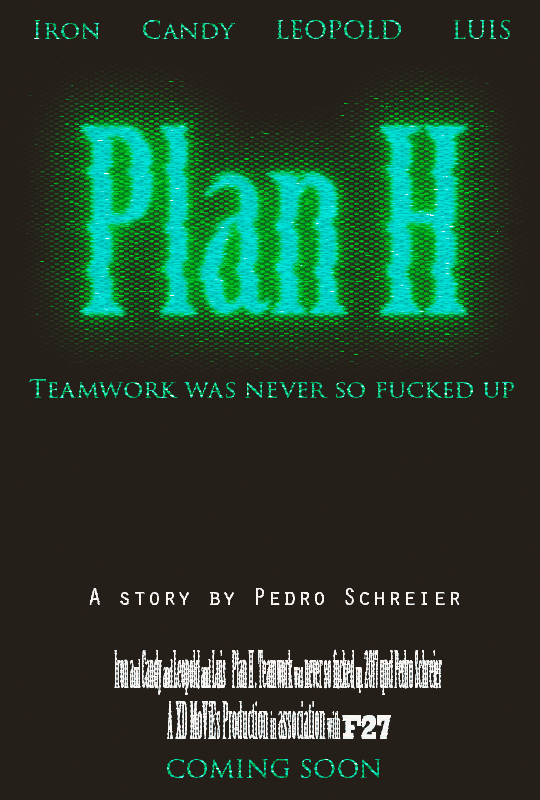 A former Prof., an unconfident student, a cheeky stripper and a dangerous hitman, what sounds like a joke is probably the weirdest team ones have ever witness.
LUIS WALKER is a shy young guy, who founds himself at the darkest time in his young life and decided to kill himself. Before he can starts his suicide attempt LEOPOLD VAHLKAMP walks into his room. The french/german man changes Luis life completely by hiring him for a secret mission of getting his money back. Together both went through a dangerous and hilarious process of acquiring the hitman IRON as safety and the female stripper CANDY for the charming part of the mission.
It soon reveals that the team is having problems of getting along with each other. A fact that complicates the plan, by considering that they only have two days to rob 120 Million Dollars from the Bolivian Mafia Boss GUSTAVO ERNESTO, who is about to leave Los Angeles to fly back to his country, Bolivia. There he would be out of reach for the group.
What reveals by the time, is that every each one of the group has a different relation to the mafia boss. For Iron it is a revenge for their former failed business relation. For Candy it is an obligation she owns Leopold for saving her life earlier. For Luis it is the chance to finally be more than just the nobody and for Leopold it is the only chance to correct a horrible mistake from the past. An intention which he successfully hide from the group, till Luis founds it out. From that point on the mission seem to fail. Leopold, Candy and Iron got kept by Gustavo’s men, and Luis got the offer to rule with him in Bolivia. An offer, that delighted him somehow, cause he never got the chance to have power and more important, a place to belong to. His trust to Leopold is weakening by the thought that he used him as a bait for Gustavo. A thought that is quickly overcome by the revelation of Leopold’s sad connection to Luis. New convinced, Luis get out with his team of misfits and end in a huge and explosive Last man standing to save what he ever searched without knowing - a family.
Screenplay