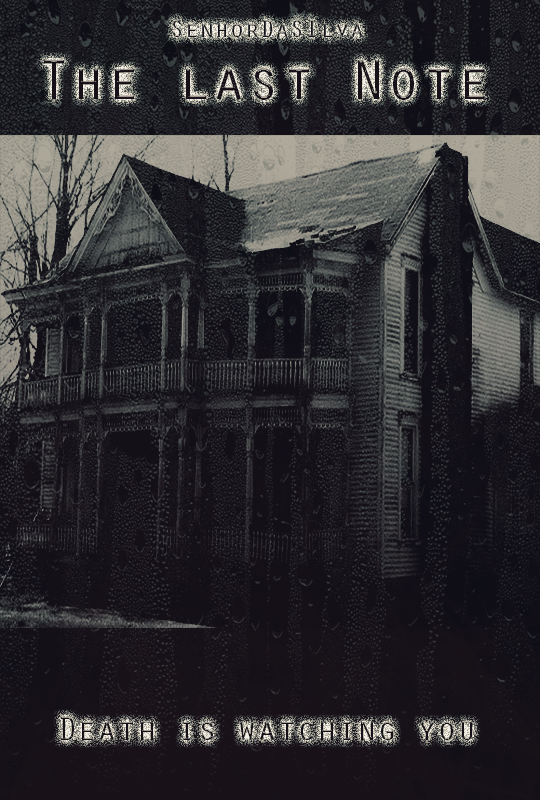 The Horror-Thriller ‘The last Note’ describes the sad circumstances that brought Mr. Howan, a famous pianist, to the retirement home ‘Old Fen’. A place disguised as friendly caretaker-spot, shortly revealing its true nature and the deadly and horrible secret within it. A place with no future, no mercy and  – no escape.

A nasty and disgusting smell filled the air of the old pension in Birmingham. A place where death was a daily visitor. A guest so silent and so quick that even time didn’t noticed his presence, when he was there.

A place filled with people who came the last time together to transfer to the other place. A place so unknown and mystique that even philospophs didn’t have a description for it. An intimidating layer of sadness was permantly lying over Old Fen It was also the place where Mr. Howan found himself in his most terrible time of his life.

Mr. Howan was all his life long an exceptionally gifted pianist. He played in famous halls all over the world. Stages, that huge, that the applaus of the celebrating crowd sounded like a heavy thunder storm. He lived for the music. He breathed it. Music was his life, until this one very day that changed everything. The day his wife Catherine decided to drive him to another concert. It was the first time she droved him. Normally his driver, Ian, droved him and Catherine. A flu caused Ian two weeks in bed. Two weeks in which Mr. Howan should have give his biggest concert. So big that Mr. Howan asked nervously Catherine to drive. She felt bad the day before. Talked about bad headaches, but the love and the admiration for her Mr. Howan was too big to bail. So she concealed that she was still doing bad and drove him in the old silver Mercedes E – class. Chopin was playing in the radio. Both adored the music of him. His music always had something cold. A coldness that touched Mr. Howan in a very uncomfortable way. Reminding him of the abuses by his mother Loren. A bad lady, born in Alabama raced by even more cruel people. Mr. Howan moved from one foster family to the next during his youth. What always followed him was his passion for classic music. Songs like Nocturne op.9 No.2 that sounded so sweetly from the player, finding soon and surely its climax.

Mr. Howan looked outside. The sky was dull and full with clouds. A light layer of fog was building up.

„Everything is going to be fine, my dear,“she said with her calmly and lovely voice. A voice so soothing like a pleasant soporific or a sweet lullaby.

Mr. Howan feigned a smile and looked back to the freeway. This fog was unnormal. It builded itself up rapidly and was now spreading over the whole area. A weird feeling in his gut. Maybe he should ask her to drive over and take a break. Her face indicated that she was somehow tired. But if he would do so, he would miss his concert. The greatest of all. He could never apoligied himself if he would miss it. Neither would Catherine.

So he decided to remain in silence. There was anyway only four miles left. Just one mile later it happened. The song was almost at his climax and something weird was going on by Catherine. Somehow her sight started to blurr. She started to see things double – and the fog. The fog seemed to eat the whole environment, leaving noting but darkness. A darkness that scarred her. A darkness that let her heart pounding like hell and her eyes fighting to stay open. The breath decelerating and sweat running down her fore head, she starts bobbing her head.

Slowly, Mr. Howan turned his look at her.

„Catherine? Are you alright?“ he asked, seeing Catherine in the same moment collapse and the car switching the lanes.

„Catherine! Honey! …,“ Mr. Howan started to scream, as the lights of a Lkw, appeared out of the fog and stopped his talk.

The next thing Mr. Howan rembered during the later interviews and the examinations is the impact of fifteen tons metal and the sweet and deadly sound of Chopin at its climax.

„Everything is going to be fine, my dear“

Mr. Howan opened his eyes, founding himself in a hospital, wired to some monitors and full with different tubes, supplying him with life essentiell liquids. Doctors, police officers, friends and aqcuaintancies came by. Giving him their consolation for his loss and explaing him that his surrvival was a true miracle. Although it cost him his ability to control his hands correctly. An ability that he didn’t cared much anymore, then since this day, he never played the piano or any other instrument again. A day that lays now over forty years back. The Lkw driver, Luke Palmer, was never seen again. A fact that didn’t interested Mr. Howan. His love was gone. Everything lost its meaning. 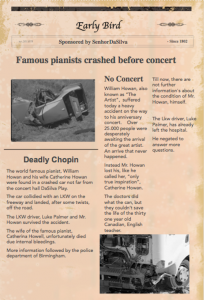 So he didn’t cared much too as his son Jack, his only child, brought him to „Old Fen“. With them, Jacks wife, Michelle. A true and lovely soul. She always reminded Mr. Howan of Catherine. A trait that he would never confess Michelle, cause he stopped to talk. Since forty years he never said a word again. Living like a human mannequin, his son and Michelle took care of him. They tried a while with a paid hostess, but she was scared by the strange kind of Jacks father. She telled something about vodooo and old evil forces.

Old Fen was their last chance, cause Jack and Michelle are now awaiting a baby. She was in the eight month and both needed the space and the time to take care of the little Isabel.

The three stopped right in front oft he entry desk, where a big black woman was siting behind. Wearing old fashioned nurse clothes. Like from the last century. Even a hhh was on her head.

„Good Morning, Jack Howan. I’m here with a lucky guest,“ Jack said and feigned a smile. A smile that got ignored by the busy and angry woman.

Jack looked questiongly to Michelle . She gave him one of those looks that challenged one to try it again.

„Papers, please,“ the woman said without taking an eye from the documents in front of her.

„Sure,“ Jack said and grabbed some papers out of a bag, hanging behind the wheel chair of Mr. Howan.

She took the paper without looking at him and started to review them.

„William Clarke Howan?,“ she asked and glanced at Mr. Howan.

„Excuse me! I asked him!“ the nurse responded in a scary and almost threatining tone.

Jack swallowed, while Mr. Howan remained in silence and stared at the ground.

„He doesn’t talk,“ Michelle explained with her sweet and warm voice, smiling like an angel.

„Not here!,“ the nurse contered in a very harsh manner.

„Excuse me,“ Jack began. „Who is the managing authority in this building?“

„That would be my humble self,“ a calmly and sophisticated voice answered.

Michelle and Jack turned to a bald-headed man in a gray suit, wearing glasses and holding a black thin cane.

„May I introduce myself? Dr. Steven Lawrence, but feel free to call me Steven,“ he explained, smiling from one cheek to the other.

He raised his hand to shake. An offer that Jack and Michellle accepted.

„How can I help you;“ the strange Doctor asked in an almost german accent.

„Well, we …“, Jack started as Dr. Lawrence bended down to Mr. Howan.

„And you must be the famous pianist,“ he said with a wide grin.

„Yes,“ Jack confirmed with a puzzled expression on his face.

„I’ve heard a lot of him. Music that made even angels jealous. I’ve heard too that just one octave of him would be enough to cure one of the worlds most toxic and deadliest disease.“

„Mortality,“ Dr. Lawrence responded with a deep tone of awe.

„I think I can’t follow you,“ Jack hesitantly confessed.

An ugly smile slowly appeared on the doctors face, while he kneels down to Mr. Howan.

„How could they? These revelations are beyond the imaginagtion of such simple creatures like them. Am I right, Mr. Howan? True artist never find their appropriate recognition in this life,“ Dr. Lawrence explained, almost whispering, while looking at Mr. Howan. Seachring for a reaction. A reaction that never came and left the doctor with a hidden sign of frustration.

„We take over from here now. Thank you, Mr. Howan. Your father is in good hands,“ Doctor Lawrence explained without taking his look from Mr. Howan.

Jack gazes at the doctor with a supsicous look on his face. Michelle noticed this look and grabbed softly his arm.

„He’s going to be fine, honey,“ she said, trying to convince him and herself.

Jack gazes for some seconds more at the doctor, who totally ignored him.

„We are going to see you soon, Dad,“ Jack said, looking worried than ever.

Michelle turned with him to go as the doctor said: „You should name her Catherine.“

Both turned to the doctor who was still gazing at Mr. Howan facinated.

„What?“ Michelle asked, trying to hide her scare.

„Your little daughter. Catherine would be a better match. It would mean a lot to your father as well,“ the doctor explained further with a deep voice.

Michelle touched her belly and opened her mouth to say something, but scared by the possible answer, she shut it again and turned to leave.

Jack shoot Dr. Lawrance a last proofing look and then he turned and left with Michelle the building.

Arrived in the car he sat  for a while, calmly and silent before turning the key. Michelle looked at him worried.

„What happened?“ she asked, afraid of the answer.

Jack played for a brief moment with the idea of tellling her that he didn’t trust this institution and that they should take his father back with them, but Jack remained in silence. He decided for a false smile and a cold kiss on her lips. A kiss that left her with an uncomfortable feeling. Michelle moved her look down to her inflated belly. Carefully she placed her soft hands on it, stroking the surface, then she looked worried out of the window to the gray building.

The rain started and the car left the parking lot of Old Fen.

It was the last time Jack should see his father.