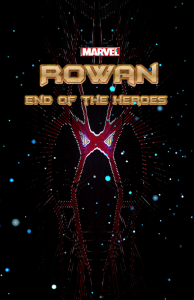 A god-like creature, Rowan, was sent from far away to earth to erase every single hero on our planet. Heroes that are in his eyes not more than a disease to his daughter, Earth. A mission in which he got company by the innocent and beautiful Laura Baker. From now on she got two days left to talk the god over and help the heroes, who teamed up to destroy the foreign invader.

I was twenty three when I met him the first time. I was working for a journalism company near to downtown of Melbourne. The day started like any other. Some anoying calls there, some boring mails here and the typical kiss-ass program. But something on this day was different. Right from the beginning. For the first time in the three years that I’ve been working for this company, I’ve decided to walk to the office. Don’t ask me why, but it happened. It was in this special street that I should lose the ability to walk forever, when there wouldn’t be him.

I was playing some beats from Nickelback – you rock guys – and didn’t took much care of my environment. A car was turning into my street, while I was crossing it. The driver, a lovely lady, was searching for her purse while driving. We both were steadily coming closer to each other without noticing it. When I saw her it was too late. My heart beat accelerated and sounded loudly in my ears. I’ve stopped blinking and saw the miracle happen. The car started to vanish, like being rubbed by an invisible eraser. Piece by piece it dissapeared. But not only the car. A part of the street in front of me dissapeard too like being blown away, transforming into sand, leaving nothing but a blank white space. I lifted my head and looked to the side. My heart stopped beating. An invisible horizontal line fought its way through the environment, vanishing everything in its way. Buildings, cars, trees all were standing there, cutted in the middle. I literaly was able to look through the building of an agency. People were moving in their offices and walk straight forward to the gaping abyss. They just kept walking like they didn’t saw the edge. I was already fearing their plunge, but it never happened. They set a foot over the edge and dissappeard to appear on the other site of the gap, walking to the other side of the office. I turned and saw the car, that was supposed to hit me, keep on driving till to the end of the road and turning. Curiously I turned back and shivered. Carefully I streched my arm in direction to the invisible line. A strange coldness ran over my skin and I saw my hand vanishing. Like sand that gets blown away. A painless and through and through indescribable moment. By pulling my arm back I’ve witnessed billion tiny pieces conneting, forming my arm. I examined my fingers and my hand with my eyes when I’ve heard his voice for the first time.

„Extraordinary,“ a warm voice said and I’ve looked up into the light blue eyes of an afroamerican handsome man, smiling and wearing casual clothes.

„I think this is the term you humans would use for a moment like this,“ he explained further and pushed his arm into the invisible line. His arm transformed. One moment I saw bones, then flesh, fire, electricity, stone, water and something that looked like an explosion of stars. All in a row. With a wave of his hand, the line disappeared and the landscape got back in his old structure. The buildings, cars and trees got back together and everything looked like normal.

He turned his look back to me. I wanted to run but I couldn’t. The only respond from me was a muted: „Who are you?“

„Not who – what,“ he smiled while walking in a circle around me. „I’m older than time and I took a long journey to see my child again. I saw you named her earth.“

He smiled and looked around the environment. „Earth. Hm. I like what you’ve done with her. Way better than their ideas.“

Finally life came back in my veins and I opened my mouth.

„Who are they?“ I asked him, shaking internally like witnessing an earthquake. He gave me a proofing look,   before he looked into the sky.

„My brothers and sisters. We are nine.“

„What are you?“ I asked further, fearing the answer.

„There is not a name for who or what we are. The closest description I saw here on earth was gods, but we aren’t one of those. We are just like you all. We are fathers, mothers, sons and daughters,“ he said.

„Of whom,“ I asked and tried to calm my breath.

He smiled and kneeled down to me.

„Of everything,“ he said and offered me his help to stand up, by holding his hand in front of my face.

Maybe it was my curiosity or my fear of rejecting his offer, possibly it was his handsome appeareance, but something motivated me to grab his hand. Just like being lifted up by air, I floated back on my feet. I was already fearing to fly away.

He smiled in a very unnatural, but seductive way.

„Why are you here?“ I asked, still trying to convince myself, that this was really happening.

His smile disappeared, leaving a wrinkle on his forehead. It was also in this moment that I saw his eyecolor changing his color, constantly selecting a new one, forming explosions of different color combinations.

„Over four billion years we left our child unattended developing itself. Untouched by our presence. Wars, catastrophies and epidemics ran over it, but we remain calm. We saw this by many other childs of us before. Unfortunaly a new form of threat ran over it. A threat that I’ve never witness before,“ he explained in a serious tone, holding his arm crossed behind his back.

I silently gazed at him, asking myself if he will hurt me. Something he later will do, without knowing it.

„Your kind call them heros. Saviors. Talented individuals. We name them misstake in the system. Threat for our child and fault of letting earth unattended,“ he explained further with a deep and almost echoing voice.

He sighed and looked at me with a reproachfull look.

„My sisters and brothers sent me to vanish our child out of the system. It would be the only way to save our other children of being infected by this virus.“

He saw the fear on my face and seemed somehow puzzled by my emotional reaction.

„What does this mean?“ I asked, worrying the worst.

Suddenly a small grin appeared on his face.

I looked at him scared and again, a small grin on his face.

„That was the situation before I’ve decided to devote myself to this task personally. We hate to kill our children, regardless of how many times we have done it before. That’s why I’ve thought and found another solution.“

I remained silent and he moved closer.

„Erase the virus and heal the organism. I’m hear to free your beautiful species from this threat,“ he said, while moving pictures appeared next to him like holograms. On the pictures I saw Thor, Spider-Man, The Hulk and many others of them.

„And you, Laura Baker, will help me,“ he explained with a strong voice.

Before I could have answer on that, the ground under me started to shake and move.

„Here,“ he said and offered me his helping hand again.

Carefully I took his hand and observed myself floating over the ground with him. Not high, just about a feet. Under us the whole environmet starts moving. Like movie props on wheels, I saw buildings, streets and evertyhing on it moving and passing me. Like someone would roll planet earth under us and this in an incredible quick pace. A huge skyscraper moved directly towards us and I feared the impact. I closed my eyes and opened them carefully again. Suddenly I witness us moving through the massive walls of the building like ghosts. I saw all people doing their calls, helding their meetings or copying some documents. The rooms moved through us till we both saw the street again on the right side and the Skyscraper moving away on the other. The landscape disappeared under our feet and I saw us floating above the giant ocean. Land appeared again and forests, homes, cars and people ran through us till the earth stopped moving and we both sank to the ground. Although we have been in ther air for no longer than one minute, I felt like I never have been on my feet in my entire life. My whole body felt weak and foreign and my sight was blurred.

„You will get used to it,“ he said friendly.

My sight got better and I winced. We were standing in the middle of a junction.

„Where are we,“ I screamed.

He raised his glance to the top of the skyscrapers around us.

„It should be the time square, If I’m not wrong,“ he said and smiled at me like a child.

I looked around and indeed we were in New York.

„What the fuck is wrong with you freaks?“ a man screamed at us out of his car, while passing by.

„What are we doing here?“ I asked him in pure panic, trying to not collapse under a heart attack.

„Starting the hunt“ he said and looked up. In this very moment a black helicopter flew by, shooting at someone. Someone no less than a man in a red, blue outfit, shooting spider webs out of his wrists. Using them to find his way through the air. Behind him a robot in gold and red, flewing throught the air and letting a fire trail coming out of his metallic feet.

I gazed at Spider-Man and Iron Man facinated, while my forgein partner grabbed my hand and asked me: „Ready?“

Fearfully I shook my head.

„Good,“ he answered and smiled.

I felt a flow of energy running through my whole body and closed my eyes.