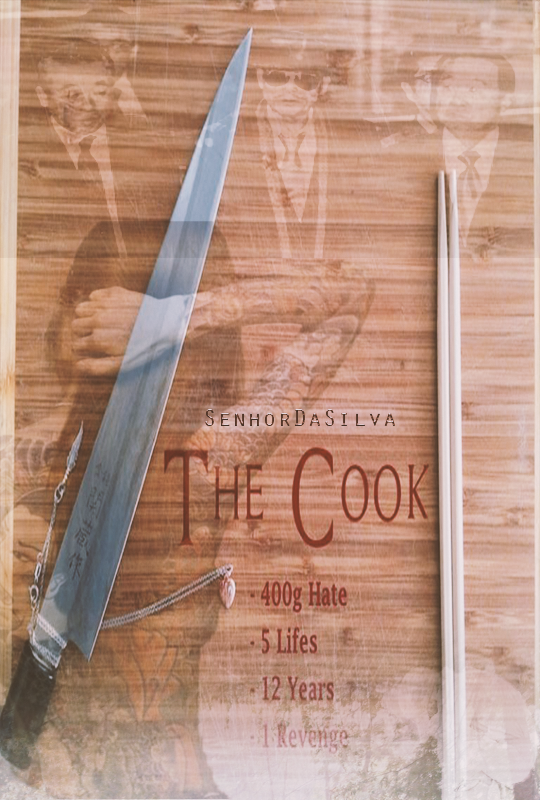 He was a child when he found his destiny and it was this time, when they've destroyed his world entirely.

Lee Himura is blessed with the talent to produce unique meals with any ingredient he gets. But he is also cursed by dealing with brutal mercs and a weak government that cost the life of his family and forced him to leave his country Japan.
He left and started a new life in France. Twenty years passed and the once five year old grown-up to a man. Full with wisdom and more - full with hate. Outside the lovable, peaceful cook. Inside the furious and well-trained warrior.
He's coming back and he'll get them. One by one. And this in his very own unique style.

Revenge is the best ingredient.

"Pretend inferiority and encourage his arrogance."

Our sad, tragic story finds its very beginning in a small fisher village close to Hikone.

It was in a small shack out of bamboos and web, where a small boy found his passion for the preparation of food. Close to an old rusty pot, he and his grandmother was watching a soup boiling. She was the oldest woman in the village and had traveled a lot through Japan, as she was young. The little Lee, have been always at her side, since his father passed away and his mother were forced to work in the factory in the city with his older brother and sister. Lee was too young with his five years. But he wasn't interested into the production of garment anyway. It was the creation of tasty food that drags his attention, ever since he remembered. A passion shared with his grandmother. She guarded him and even if she never would say it, did she loved him very much. All the worse, that this meal would be the last meal they cooked together.

She looked into the soup, closed her eyes and breathed the smell into her nose.

»Bring me the chicken!«, she commanded without opening her eyes or moving her head.

»Hai«, Lee answered proper like a little soldier and moved to a small wooden desk. A skinned chicken was lying there in a bowl full with blood and bones. He picked it up and moved - no. ran - strictly towards her.

Holding up the chicken and declining his glance, he stopped besides her.

She opened her eyes again, like surprised by waking up there. Then she looked at the chicken.

Lee looked at her first surprised and then grateful.

»But be careful. Don't ruin the taste.«

The little boy knew what this meant and moved with the chicken to a small wooden cabinet. In the cabinet, were dozens and dozens of  herbs.  He gazed at them silently and just like an artist, like the herbs were talking to him, he took out five of them and moved with his selection and the chicken back to the table with the bowl. He put the ingredients down, grabbed a knife next to the bowl and started to cut the chicken. While he was pouring and kneading herbs into the pieces of chicken, his grandmother observed him with a hidden expression of admiration. She never saw someone that confident about what he does. It seemed like he was born for it. Yes born, to make the best out of every single ingredient. Everyone knew about his innate talent. Some of the folks,  even seen it as a curse. Understandable by the sight of a small five year old creating food no one ever have seen before. Not here. Not anywhere in Japan. Lee finished the pieces and carried them to the pot. He looked curiously at her, waiting for her approvement. She nodded without saying something and the small boy threw the pieces into the pot. The water seethed wildly and the chicken disappeared in the soup. Both looked at each other in consent. Ones could even swear to have seen a small grin on her face. The door opens and a beautiful woman stepped in. With her, Lee's sister and his brother. All three wearing poor clothes. Just like Lee and his Grandmother, Jiji.

His mother looked at them and smiled by the good smell that surrounded the small shack.

Together, all five took a seat at the earthy ground, right around a small table. Old grandmother light up some incense sticks and the five begun to pray. A ritual of harmony and piece. Something Lee always loved. The five raised up again into a straight siting position and Lee's mother opened her mouth the say something, when at this moment a bullet fought his way through her skull. Blood splashed on the table and the four were paralyzed by fear. Slowly her face lost all sign of life and she dropped over at the table, right into the pot with her face.

Lee gazed at her startled. Jiji fought her tears and moved her glance to the door, where a bald-headed Japanese stood. Holding up a gun and grinning like a devil, while smog was fuming out of the gun barrel.

In the blink of an eye, the peaceful shack was full with japanese mercs. Their shouts mixed with the screams of Lee's family. Everything happened to fast for him to realize what was going on. They rapped his sister, hanged his brother and surrounded him and his grandmother, Jiji. The only two of the family, who have been still alive. Jiji took position right in front of Lee to protect him. The bald-headed man moved in front of her and started  to laugh. An ugly laugh, joined by the rest of the men. She slowly starts to remove an amulet from her wrist. A beautiful silver amulet with a small pink pendant in form of a heart. The mercs didn't noticed that. Too funny was it to laugh about the misery of the poor japanese family.

Jiji opened the mouth to say something, when the bald-headed man decided to shoot a bullet into her heart. He hit it perfectly and let her clothes turned red right at the spot. Jiji gazed angrily at him, without a sign of fear or pain. Lee screamed like a maniac and embraced her strongly. She was to heavy for him, so when she dropped on her knees, he fall immediately too. The men kept laughing, while Jiji was lying on the ground between the dirt and the remains of the soup, which the mercs had thrown on the ground.

Lee kneeled down to her and cried.  She grabbed his fingers and put the bracelet right into his hands, so that no one could have seen it.

»Keep on the path. Keep the balance, little cook«, she whispered carefully that no one could hear her and passed away, leaving her eyes open with a small tear running down her cheek softly.

While the bald-headed man was loading his gun again, a bearded japanese soldier (the only bearded-one of them) moved to the table and stopped right in front the only plate on it (all others have been thrown on the ground). He closed his eyes and breathed the amazing smell into his nose. A light smile shined up on his face, followed by an express of pure fear.

The bald-headed man raised his gun and pointed  it right next to Lee's temple.

Lee closed his eyes and remains in pure calm.

The bald-headed man gazes at the bearded-soldier, also known as Katsuro the leader of the troop.

The bald-headed man looked at Lee with disgust but he obeyed as commanded and grabbed Lee at his collar.

»Come on!«, he shouted while dragging him away from Jiji.

»Jiji! Jiji«, the little boy shouted as crazy, trying to escape, but no chance. The man was too strong. And so, the group left the small shack, leaving broken pieces of what was once Lee's world.